What started as an initial deployment of surveillance cameras for several Public Works facilities back in 2011 has now grown to incorporate multiple locations throughout the city.  Inglewood’s city wide surveillance system has cameras installed at key facilities throughout the city as well as many intersections providing a layer of security and response capability for the city and its citizens.  Now in its sixth year of expansion, the City of Inglewood continues to engage their trusted technology partner, Leverage Information Systems.  Leverage has been part of the project from the very start and continues to provide design, deployment and integration expertise that has made the project so successful.  This phase of the project has plans to update the Police Department and Jail facility, the City Hall Parking Structure as well as multiple cameras at various intersections throughout the city. 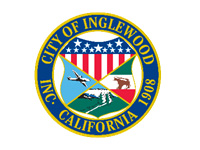